Analyze your Sales process in the pipe history report

The report Pipe history for Projects gives you the possibility to analyze the flow of projects through your pipe/s during a given time. Reach the report via Report – Project – Pipe history.
The report can be used to analyze:

• Bottleneck stages in your process and which stages to streamline.
• Your effectiveness in moving deals forward in the process. Can we become more efficient?
• For how long a prospect stays in one stage before heading forward.
• The amount of won and lost projects during a given time.
• How efficient a Sales responsible is or a group of Sales responsible are when working with their prospects.

The report measures movements for projects heading from one stage to the next in your sales process; this is analyzed in percent. The formula for the calculation is:

The number of projects moved from stage 1 to stage 2

To be included in the calculation above the projects need to be submitted one step at the time. By using the three filter choices Pipe, Period and Sales responsible, you can modify the information shown in the report. The possibility to analyze each process, different periods and/or Sales responsible arises. 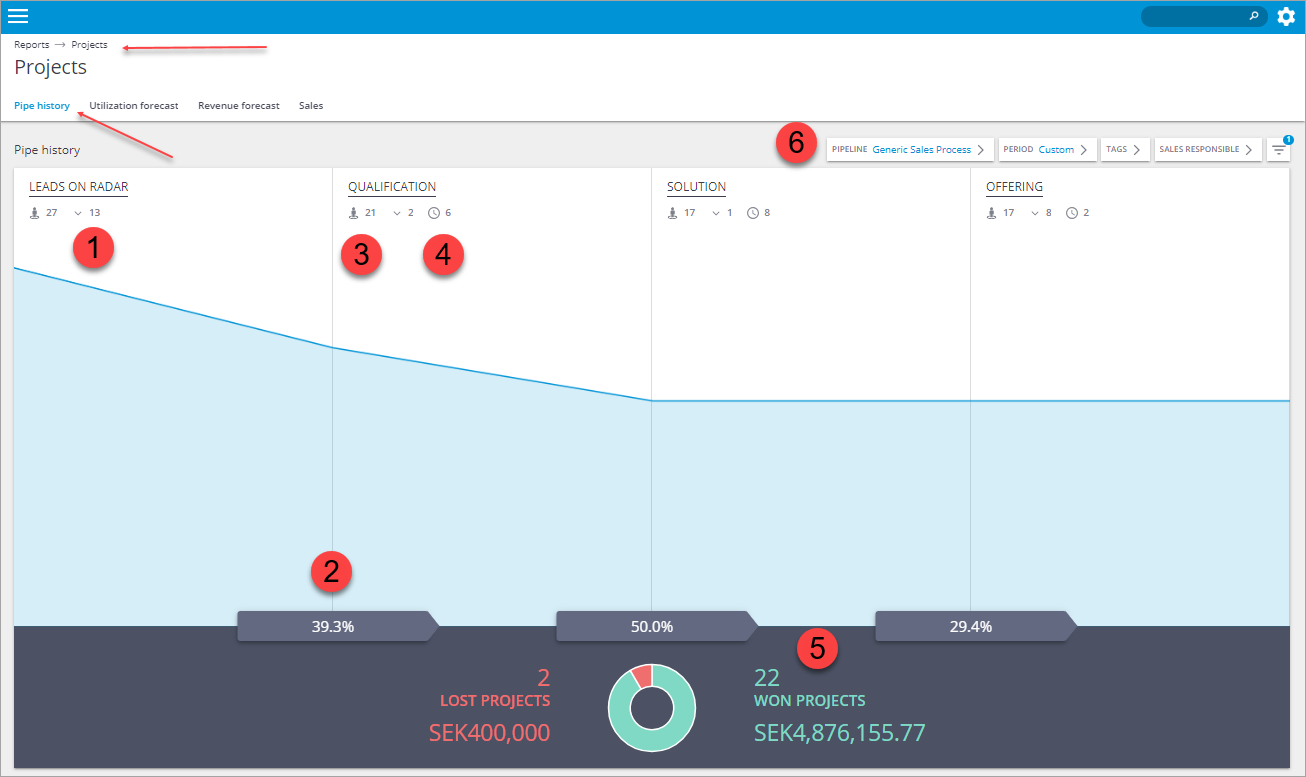 The different figures in the report are explained below:

1. This figure describes how many new projects were added to this stage.

2. The percentage indicates the number of projects moving forward from the previous stage in percent. By hovering, the numbers used in the calculation is shown.

3. This number explains newly added and moved projects to this stage. A movement can imply that a project is transferred to the next stage, backward, or several stages forward. A project moved from Interview to Screening increase the number by one in the Screening stage. A project moved several stages, e.g. from Screening to Offer without striking the intermediate stages, increases the number by one in the Offer stage. This project is not involved in the percentage figure that is shown between the previous stages.

4. This figure illustrates the number of days a project has been in the previous stage.

5. This figure present how many projects being Won (got status Won) or Lost (acquired status Rejected by Us or Rejected by Customer) during the given time and the total estimated deal value.

6. The filter choices decide which pipe to be analyzed, which period (start- and end date) and recruitment responsible the report should be based on.